Announcement (15/12/2015):
JohnnyBro's How To Draw Manga has relocated to the following site:
johnnydrawsmanga.com
Please visit us for more tutorials! Thank you

How to Draw Manga Eyes


The eyes are an important part of the face. It gives your characters personality, it conveys emotions and it basically changes the way your character looks. It is also the part where you can inject the most life into it compared to anywhere else.

The above picture compares a realistically drawn human eye to a typical manga eye. Both types of eyes have the same parts to it, although the shapes are drawn differently. In manga eyes, the upper and lower eyelids does not always join together, and so the sclera (the white part of the eye) does not always have a clear outline. Also, even though both the irises pictured above are round, manga eyes can also be drawn oval in shape as you'd be able to see in the following sections.

Here are some of the common basic shapes used to draw manga eyes. 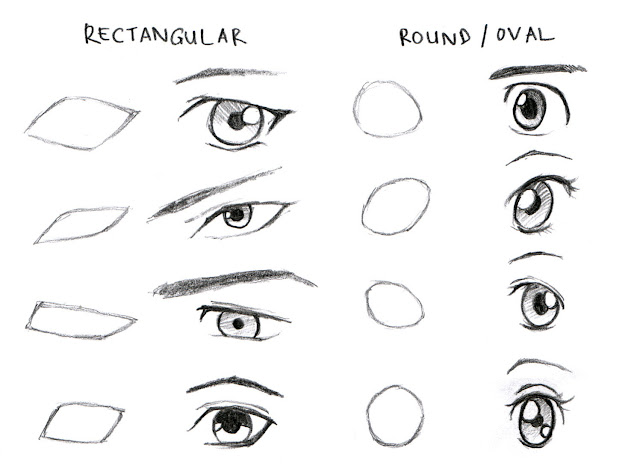 Rectangular eyes are commonly used for male characters in shonen manga. You can play around with the rectangle by slanting it up or down, changing its length/width or varying how sharp the corners of the eyes are.

Rounded eyes have a softer look, and so you'll find that many girl characters are drawn with these eyes. You can also draw rounded eyes for your younger male characters.


Of course, this guidelines aren't definite, so feel free to experiment by drawing your characters with different eye shapes.

More after the jump. 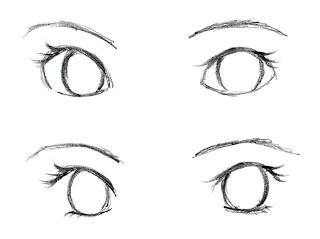 Notice how you don't have to outline the entire eye by connecting the upper and lower eyelids. However, you can always join them up to create the cat-like eyes.

Tip: Make sure the iris touches or is slightly covered by the upper eyelid. Don't leave a white space between the iris and the upper eyelid unless you want to convey certain expressions, such as shock or surprise. 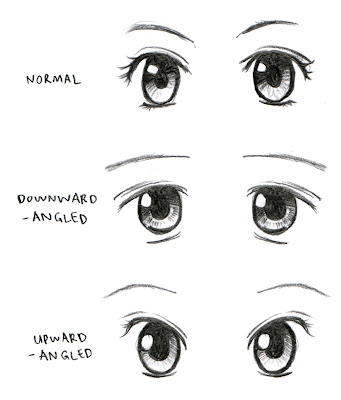 The eyes can also be drawn at an angle to give them a different feel. The picture on the left shows normal eyes, downward-angled eyes, and upward-angled eyes.

When creating a manga character, choose an eye type that agrees with your character's persona.

For the eyelids, draw many overlapping lines to create thick eyelashes. Add in a few individual strands for extra effect. This type of eyelashes are commonly used for drawing manga girls' eyes to make them look pretty.

Tip: When drawing girls' eyes, draw the outline of the iris thick as well. 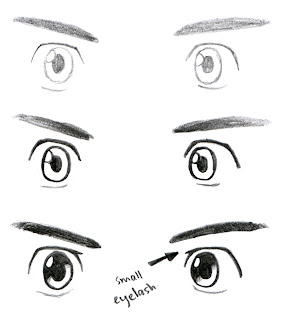 You don't always have to draw the eyelashes prominently, or even at all. For example, when drawing boys' eyes, it is enough to simply thicken the upper eyelid, while leaving the lower eyelid thin. You can then add a small eyelash at the upper eyelid for a clean look.

Once you've drawn the shape of the eyes, you can then think about how you'd want to color in the iris.

You can add in a bunch of highlights (the white bubbles) of varying sizes.

You can shade the upper portion of the eyes to create a shadow.

There are many ways that the iris can be shaded. Some of the stuff that you can play around with include:

From the first eye that I have drawn, you can see that it is even possible to simply leave the iris white. Doing so give the character a unique look.

Eye No. 2 has two highlights, one at the top and another at the bottom. Eye No. 3 is drawn with a small pupil, a small highlight at the top left, and a lightly shaded iris. Notice that the outline of the iris leaves an opening where the highlight is. Eye No. 4 has its bottom right highlight drawn partially outside of the iris. Eye No. 5 has simple black and white shading. Eye No. 6 has a tiny white bubble overlapping the pupil.

These are just a few of many ways to color to eyes, so start observing how your favorite manga artists does it, and develop your own style!

I've also prepared an image of a blank set of eyes repeated 12 times on an A4 sized paper that can be printed out for practice (click on the image to make it bigger). You can use this to practice different ways of shading the iris without having to keep redrawing the eyes. 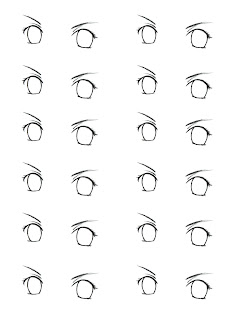 Here's a step by step guide of how you can draw a manga eye.

Step 1
Think you the eye shape that you want and lightly sketch the outline.

Step 2
Draw in the iris in the middle of the eye.

Step 4
Sketch the pattern of the iris that you want. Then draw in the highlights, shadows, the pupil. Also, draw a single curved line above the upper eyelid if you want double-layered eyelid.

Step 5
Color in or shade the iris.

Step 6
Draw the eyelashes and add in finishing touches to the eyes.


To be continued in Part III

Posted by johnnybro at 2:11 am