Announcement (15/12/2015):
JohnnyBro's How To Draw Manga has relocated to the following site:
johnnydrawsmanga.com
Please visit us for more tutorials! Thank you

How to Draw Manga Eyes


How a Real Eye Works

In order to draw manga eyes, it is important that we first understand the structure of real eyes.


First we start with the eyeball. The eyeball is a 3D sphere inside the human head. There is an iris at the tip of the eye, and a pupil located at the center of it. The image below shows how the eyeballs look like from the side, front, and as it is rotated partially to the side.

Notice the front area of the eye cut away with the dotted lines above? That's the flat area where the lens of the eyes go, creating the slight bump. The pupil of the eye is located on the flat spot.

More after the jump. 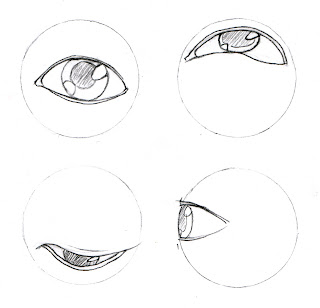 The eyelids also have a thickness to it.

An important thing to remember is that the eyes and its surrounding area isn't flat. 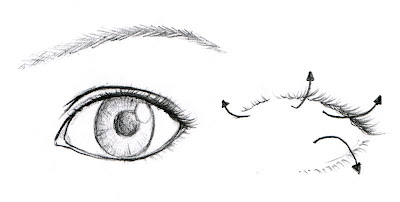 The eyelashes are very short hairs that grow from the edge of the eyelid. Both manga eyes and real eyes have these, but they are especially pronounced in manga girl eyes. The direction of their movements are shown in the picture above. The eyelashes on the upper eyelid dips down slightly before bouncing back up away from the eyeball. 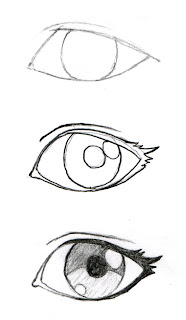 Sometimes, in manga eyes, we don't normally draw every single eyelash. Instead, it can be drawn as a single thick line and then colored black as shown in the drawing to the left.


Below is how the left eye looks like from different angles.

To be continued in Part II.

Posted by johnnybro at 2:11 am